The PEA for the Troilus Gold Project supports a combined open pit/underground mining scenario with low initial capital costs and high rate of return for a 35,000 tonnes per day (“tpd”) operation over a 22-year mine life.

Summary of Troilus Gold Economic Results by Gold Price (US$) 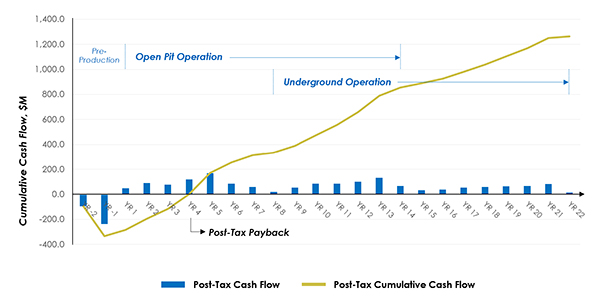 The PEA capital and operating cost estimates for the Troilus Gold Project are summarized below.  The Initial CAPEX (net of existing infrastructure) is US$333 million and Sustaining CAPEX over the life of the mine is an additional US$506 million.  The underground mine will require US$240 million of underground development CAPEX in years 6 to 8 and US$175 million in sustaining capital to maintain the underground operation.  The underground will start development with first mill feed projected to come online in Year 8.  All in Sustaining Cost (“AISC”) is US$850 per ounce AuEq*. 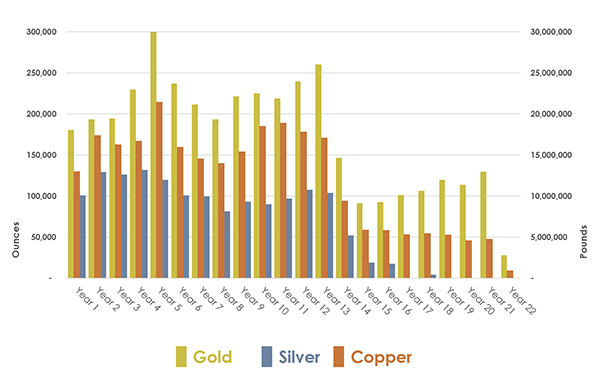 The PEA considers an initial open pit mining using a 100% owner operated equipment fleet including 28- 181 tonne trucks, electric hydraulic shovels, wheel loaders and drills.  The open pit will overlap mill feed production with the underground mine starting in year 8.  The open pit will be complete in Year 14 and the underground mine will continue production until Year 22.  The mine has been designed to deliver an initial 12.6 million tonnes per year (35,000 tonnes per day) of mill feed.  The PEA contemplates a mine that will extract mill feed over a 22 year period not including 12 months of pre-production stripping. The PEA delivers 192.5 million tonnes with average head grades of 0.71 gpt gold, 0.08% copper and 0.97 gpt silver. The process plant is expected to have three months of commissioning in the first year of production.

The average strip ratio for the open pit life of the mine is estimated at 3.9:1.  Material movement averages 71 million tonnes (feed and waste) in the first 5 years with the peak at 74 million tonnes in Year 1.   The open pit will provide 150.1 million tonnes of feed to the process plant for the first 14 years of the project.  Open pit bench heights of 10 metres will be mined and ore hauled with 181-tonne haul trucks and matching loading equipment including electric hydraulic shovels.  The open pit mining fleet will be leased.  Best practice grade control drilling will be done with reverse circulation drilling and rock sampling on mine benches prior to blasting.  This provides the greatest flexibility for grade control during operations while maintaining reasonable mine operating costs and production capability.

Underground mine development will commence in Year 6 and first mill feed to the plant from underground occurs in Year 8.   The underground mine will be located beneath the 87 Zone pit and utilize sub-level caving along the edges of the open pit and slot and mass blast in the lower levels.  The portal is located adjacent to the primary crusher.  Mill feed material and waste will be brought to the surface initially with trucks but will transition to the RailVeyor system for the life of the mine.  The underground mine will ramp up production from its initial levels to 9,000 tpd by Year 9 and maintain that rate until the end of the mine life.

Initial test work was completed by COREM and Kappes Cassidy as well the historical operating data, to develop the flow sheet.  The process plant consists of primary crushing, SAG and ball milling with gravity gold concentration, copper flotation, concentrate filtration and tailings thickening and disposal. Copper concentrate, enriched with gold, will then be sent to a smelter for refining. Gold recovery is estimated to be 90%, with 30% produced onsite as gravity concentrate and the balance contained in the final copper concentrate. Copper recovery is expected to be 90%.

The Troilus Gold Project is located in Quebec, approximately 120 kilometres north of Chibougamau, where Inmet Mining Corporation operated a large mine/concentrator complex from 1996 – 2010.  Access to the mine site from Chibougamau is by the Route du Nord.

The Troilus project benefits greatly from the upgraded, and substantial infrastructure on site including:

The existing tailings management facility has the capacity to accommodate the life of mine production as described in this PEA. As part of the design it is proposed to develop the tailings dam into a centreline constructed containment from the existing upstream designed containment. The building of this containment wall will utilise waste rock from the mine operations.