Intercept highlights from the Southwest Zone drilling include*:

Justin Reid, Chief Executive Officer of Troilus commented: “Results from the small drill campaign in the Southwest Zone completed in December 2019 identified a sizeable new zone of mineralization 3.5 km southwest of the existing Z87 pit where almost 2 million ounces of gold was produced. The discovery of 2.87 g/t AuEq over 17 metres within a broader section of 2.26 g/t AuEq over 24 metres in hole TLG-ZSW19-177  (see press release dated January 28, 2020) prompted us to push forward with further exploration. We are very encouraged by these new results, which continues to expand the scale of the Troilus mineralizing system.  It is our view that the Southwest Zone may have the potential to add to Troilus’ already compelling estimated mineral resource which includes 4.71 million ounces of Indicated gold equivalent and 1.76 million ounces of Inferred gold equivalent as announced in November of last year (see press release dated November 12, 2019).  Our Technical team is now analyzing the Southwest Zone drill results with the intention of incorporating the findings into the overall resource estimate in the coming months.”

Initial drilling conducted late last year at the Southwest Zone defined an area of 500m x 250m located just 3.5 kilometres southwest of the Z87 pit and readily accessible from the existing mine road (see Figure 1).  All seven drill holes successfully intersected gold including high-grade intersections and demonstrated geology similar to that of Z87.  Based on the positive results from the 2019 drill program in the Southwest Zone as reported January 28, 2020, Troilus has completed another 6,000 metres of drilling through February with the objective of testing a larger area and confirm that homogenous mineralization can be observed is throughout.

GEOLOGICAL DESCRIPTION OF THE SOUTHWEST ZONE

The Company’s technical team has applied the new geologic model derived from two years of successful drilling and analysis at Z87 and the J-Zone to the broader Troilus property resulting in the discovery of the Southwest Zone.   Diorite, brecciated diorite and felsic dikes occurring within the main Troilus zones are shown to extend further S-SW, to the Southwest Zone. The February program encompassed seventeen (17) diamond drill holes, adding to the results from the seven holes drilled in late 2019, all of which  successfully intersected gold at shallow depths including high-grade intersections and demonstrated geology similar to that of Z87 (see press release dated January 28, 2020).   These results confirm a more than 1 km mineralized trend.

The Southwest Zone  is defined by two key mineralized zones: the ‘Main Zone’ and the ‘West Zone’ (Figure 2). The Main and West Zone are predominantly differentiated by gold content. The SWZ extends for approximately a kilometer along strike and varies from 10-70 metre in width. The SWZ remains open along trend and at depth.

Both the West and the Main Zones have been interpreted to represent opposite limbs of a major regional syncline that has likely been subjected to a primary, regionally emplaced phase of gold bearing mineralization (first major gold event). The Main Zone distinguishes itself from the West Zone having clearly been highly altered by a secondary/ later gold and copper bearing event, which is characterized by dark silica (quartz) flooding, brecciated (fractured) fragments, and intense fracture-filling chalcopyrite (main source of copper) and pyrite, pervasive magnetite, as well as free gold (Figure 4).

Higher grade intervals appear associated with the highly altered Main Zone resulting from local, focused structural controls and fluid traps acting as a conduit for alteration/mineral deposition. The importance of structural controls on gold and copper has been a key focus for the Company during the last two years and has driven the significant mineral resource expansion and new discoveries across the property. TLG hopes to continue to outline this new zone and apply the same exploration approach along the belt.

These results from the February 2020 program, coupled with those from the Fall 2019 program, continue to support management’s belief that the Troilus property is part of a huge, regional scale system and remains materially underexplored.

Further results from the Southwest Zone drilling are expected to be released in the coming weeks.

ONGOING OPERATIONS DURING THE COVID-19 PANDEMIC

As reported by Troilus in a press release dated March 17, 2020, the Company has closed its offices in Toronto, Chibougamau and Mistissini and ceased operations at site and staff continue to work from home.  The technical team is focused on analyzing the drill results from the Southwest Zone drill program that was completed at the end of February, with results to be incorporated into the current mineral resources estimate which was last updated November 12, 2019.  Concurrently, the engineering team continues to compile data, tests and design work to be incorporated into a Preliminary Economic Assessment (“PEA”).

Having closed a private placement for gross proceeds of $12,832,683 on February 28, 2020, Troilus has a strong balance sheet and sufficient cash reserves to continue operations and deliver results through 2020. 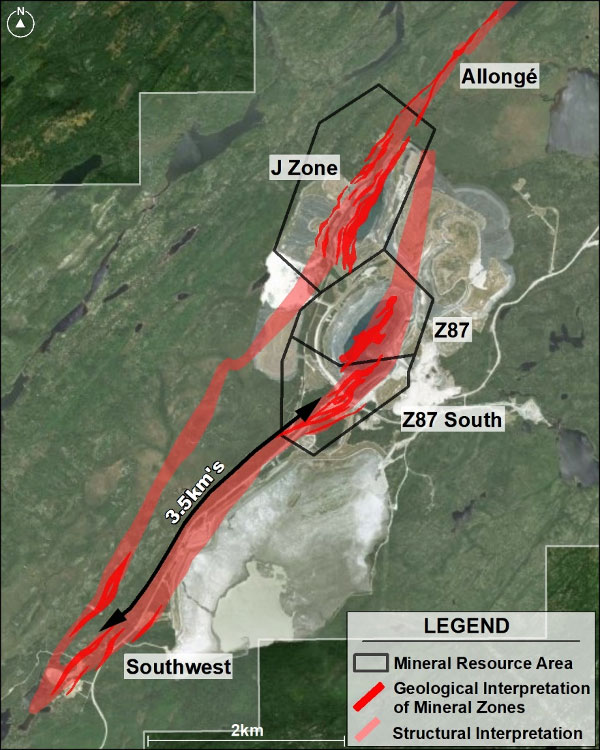 Figure 1: Geological and Structural Interpretation of Mineralized Zones.  Current Drill results are from the newly discovered Southwest Zone which is 3.5 kilometres south of Z87 and accessible from the main road. 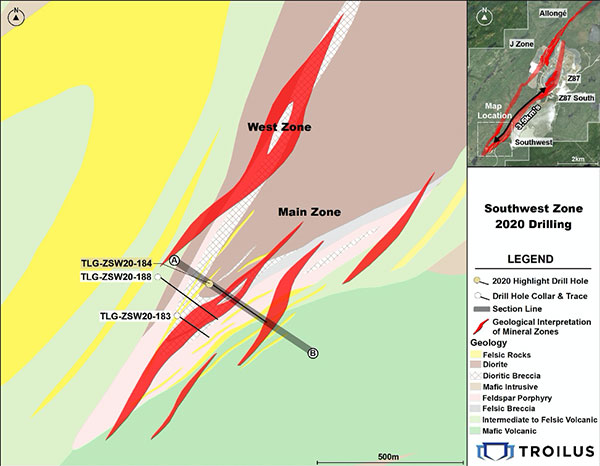 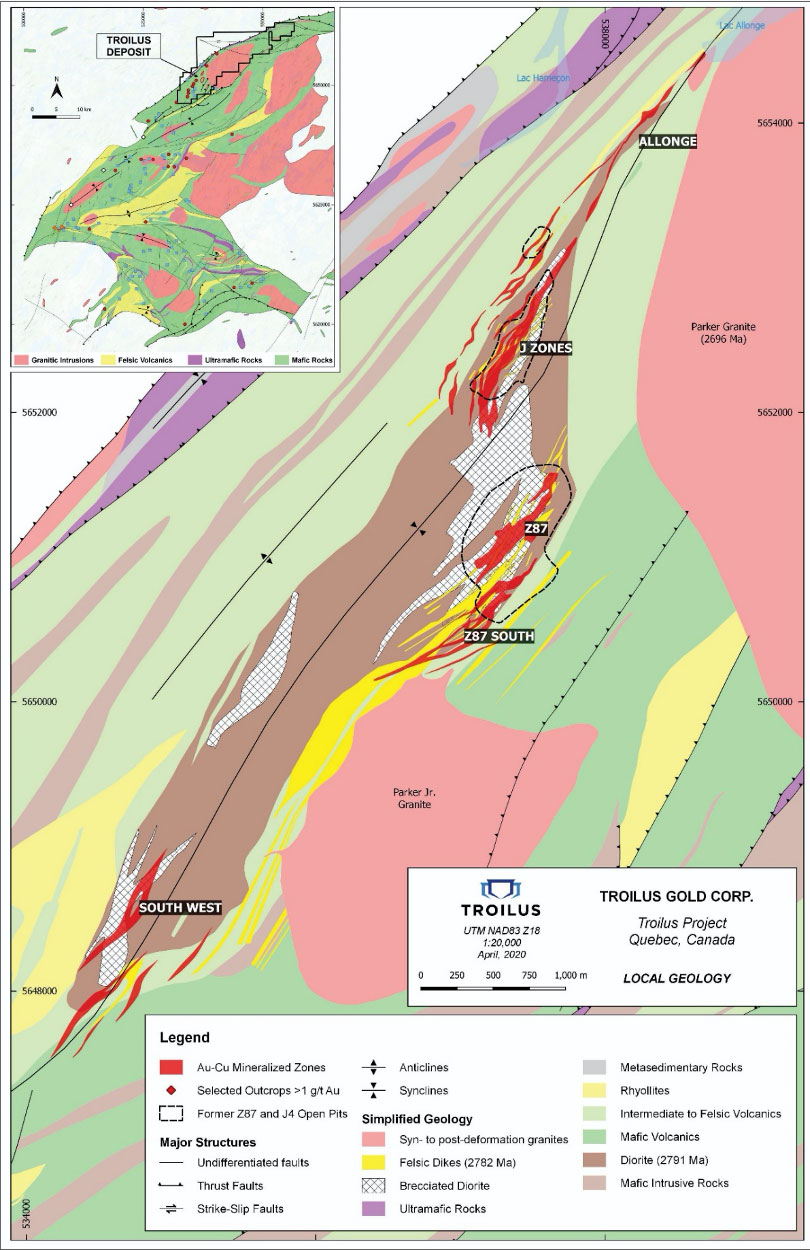 During the Southwest Zone drill program in 2020, one metre assay samples were taken from NQ core and sawed in half. One-half was sent for assaying at ALS Canada Ltd. (“ALS”), a certified commercial laboratory, and the other half was retained for results, cross checks, and future reference. A strict QA/QC program was applied to all samples; which included insertion of one certified mineralized standard and one blank sample in each batch of 25 samples. Every sample was processed with standard crushing to 85% passing 75 microns on 500 g splits.  Samples were assayed by one-AT (30 g) fire assay with an AA finish and if results were higher than 3.5 g/t Au, assays were redone with a gravimetric finish.  For QA/QC samples, a 50 g fire assay was done.  In addition to gold, ALS carried out multi-element analysis for ME-ICP61 analysis of 33 elements four acid ICP-AES.

The technical and scientific information in this press release has been reviewed and approved by Bertrand Brassard, M.Sc., P.Geo., Senior Project Geologist, who is a Qualified Person as defined by NI 43-101.  Mr. Brassard is an employee of Troilus and is not independent of the Company under NI 43-101.

Troilus is a Toronto-based, Quebec focused, advanced stage exploration and early-development company focused on the mineral expansion and potential mine re-start of the former gold and copper Troilus mine. The 16,000-hectare Troilus property is located northeast of Chibougamau, within the Frotêt-Evans Greenstone Belt in Quebec, Canada. From 1996 to 2010, Inmet Mining Corporation operated the Troilus project as an open pit mine, producing more than 2,000,000 ounces of gold and nearly 70,000 tonnes of copper.

This press release contains “forward-looking statements” within the meaning of applicable Canadian securities legislation. Forward-looking statements include, but are not limited to, statements regarding the impact of the  planned drill program and results on the Company, the possible economics of the project and the Company’s understanding of the project; the development potential and timetable of the project; the estimation of mineral resources; realization of mineral resource estimates; the timing and amount of estimated future exploration; the anticipated results of the Company’s planned 2020 drill program and their possible impact on the potential size of the mineral resource estimate; costs of future activities; capital and operating expenditures; success of exploration activities; the anticipated ability of investors to continue benefiting from the Company’s low discovery costs, technical expertise and support from local communities.  Generally, forward-looking statements can be identified by the use of forward-looking terminology such as “plans”, “expects” or “does not expect”, “is expected”, “budget”, “scheduled”, “estimates”, “forecasts”, “intends”, “continue”, “anticipates” or “does not anticipate”, or “believes”, or variations of such words and phrases or statements that certain actions, events or results “may”, “could”, “would”, “will”, “might” or “will be taken”, “occur” or “be achieved”. Forward-looking statements are made based upon certain assumptions and other important facts that, if untrue, could cause the actual results, performances or achievements of Troilus to be materially different from future results, performances or achievements expressed or implied by such statements. Such statements and information are based on numerous assumptions regarding present and future business strategies and the environment in which Troilus will operate in the future. Certain important factors that could cause actual results, performances or achievements to differ materially from those in the forward-looking statements include, amongst others, currency fluctuations, the global economic climate, dilution, share price volatility and competition. Forward-looking statements are subject to known and unknown risks, uncertainties and other important factors that may cause the actual results, level of activity, performance or achievements of Troilus to be materially different from those expressed or implied by such forward-looking statements, including but not limited to: there being no assurance that the exploration program will result in expanded mineral resources; risks and uncertainties inherent to mineral resource estimates; receipt of necessary approvals; general business, economic, competitive, political and social uncertainties; future prices of mineral prices; accidents, labour disputes and shortages; environmental and other risks of the mining industry, including without limitation, risks and uncertainties discussed in the Technical Report to be filed and in other continuous disclosure documents of the Company available under the Company’s profile at www.sedar.com. Although Troilus has attempted to identify important factors that could cause actual results to differ materially from those contained in forward-looking statements, there may be other factors that cause results not to be as anticipated, estimated or intended. There can be no assurance that such statements will prove to be accurate, as actual results and future events could differ materially from those anticipated in such statements. Accordingly, readers should not place undue reliance on forward-looking statements. Troilus does not undertake to update any forward-looking statements, except in accordance with applicable securities laws.