The results reported today are among the thickest and most continuous high grades identified at the Project and includes the single highest-grade interval ever drilled at the Troilus Mine site. Furthermore, a new shallow and high-grade panel of mineralization has been defined at the border of the Z87 PEA pit shell, which was not modelled in the Preliminary Economic Assessment (“PEA”; see PEA results press release dated August 31, 2020) nor considered as part of the pre-feasibility engineering work. This new panel West of Z87 has thus far been identified over a 300-metre strike length and remains open at depth and towards the Gap Zone. Highlights are reported below, while the complete results are presented in Table 1, and drill hole locations are shown in Figures 1 and 2. As a result of Troilus’ belief in the immediate impact of this new zone on the economics of the deposit, and after careful consideration, the Company will aggressively work on defining the impact of this shallow high-grade material, and as such intends to shift its engineering focus to the delivery of a Definitive Feasibility Study, rather than a pre-feasibility study as initially planned, that will incorporate these results. Further details on the status and delivery of the next engineering study is provided below.

Drill holes 87-410 and 87-411 discovered a new high-grade, at-surface, mineralized structure, returning 2.52 g/t AuEq over 25m (54m to 71m down-hole), including 12.36 g/t AuEq over 3m and 3.15 g/t AuEq over 6m as well as 2.04 g/t AuEq over 17m (22m to 39m down-hole), including 4.95 g/t AuEq over 5m, all located entirely outside the PEA pit shell. The mineralized panel currently has an interpreted minimum strike length of 300 metres, 200 metres of which extend southward beyond the limits of the Z87 pit shell modelled in the PEA, and remains open in all directions. The northern extent of the structure correlates and is continuous with mineralized intervals in the Z87 hanging-wall, which were previously not modelled due to lack of continuity and sampling in this area. The diorite intrusion which hosts this new zone was historically believed to be un-mineralized, therefore was only sampled intermittently in past drilling programs. Sampling of these intercepts is now underway, with the aim of better defining and extending this new mineralized trend. This will also add potential to identify additional zones throughout the hanging-wall. Current practice of top-to-bottom sampling of drill holes, combined with a more detailed understanding of structural controls, have proven this unit to host mineralization. A newly developed structural model indicates that this new zone may be part of a much larger prospective trend, which the Company intends to explore more extensively in the immediate future.

Drill hole 87-417 intercepted the single best metre ever drilled at Troilus, 154.27 g/t AuEq over 1m, within an exceptional interval of 4.38 g/t AuEq over 46 metres. This interval lies 265 metres outside of the PEA pit shell, occurring at a vertical depth of less than 400 metres from surface, and supports the opportunity for additional high-grade material down-dip and along strike of the current resource.

Justin Reid, CEO of Troilus Gold, commented, “We are thrilled about the exceptional high-grade drill results announced today, including those defining a brand new, shallow mineralized panel located just beyond the pit shell modelled in our PEA. We expect these results to have a significant impact on the economic modelling of the project since we believe both the grades and widths of the new discovery in Z87, along with its proximity to the main deposit, have the potential to immediately enhance the project’s grade profile, notwithstanding any further definition. It also reconfirms the imperative for ongoing exploration efforts across the project as part of our commitment to deliver value to all our shareholders, as these have consistently expanded the orebody across all main zones. As a result of these positive technical developments, coupled with cost and timing considerations, management has refocused its engineering efforts towards a definitive feasibility study which we expect to deliver in H2 2023 following the completion of the Z87 panel drilling. This decision allows our exploration team to continue aggressive drilling and further define areas of mineralization along this corridor that remain open to expansion, including today’s high-grade discovery. Management believes its decision to focus on delivering a feasibility study, rather than the anticipated pre-feasibility study will ultimately result in the delivery of a better, more accurate economic study to its stakeholders.”

Considering the materially significant exploration results that have recently been obtained, the Company has opted to proceed to a feasibility study from the PEA completed in August 2020, rather than bridging those engineering studies with a Pre-Feasibility Study as previously planned.

Earlier this year, the Company announced the results of extensive metallurgical testwork completed by Eriez and Base Met Labs, which confirmed high recoveries across all zones of the orebody (see press releases dated February 28, June 28 and July 12, 2022). These results will be built upon with further variability testwork to support the higher level of accuracy (+/- 15%) of a feasibility study. The Company will continue to progress engineering work with its consultants for all aspects of required engineering, including an extensive water management plan for the project and for the Environmental and Social Impact Assessment (“ESIA”). The feasibility study is expected to be completed in H2 2023 upon completion of drilling. The updated sequence of engineering studies is anticipated to maintain timelines for Provincial and Federal permitting processes to align with our Feasibility Study, which were initiated in May 2022.

The new sequence of technical studies will allow the latest high-grade drill results to be incorporated into the mine plan, which the Company strongly believes could be immediately impactful on the grade profile and mine sequencing of the project. The feasibility study timeline will also allow the Company to better understand and define zones of mineralization that remain open to further expansion. 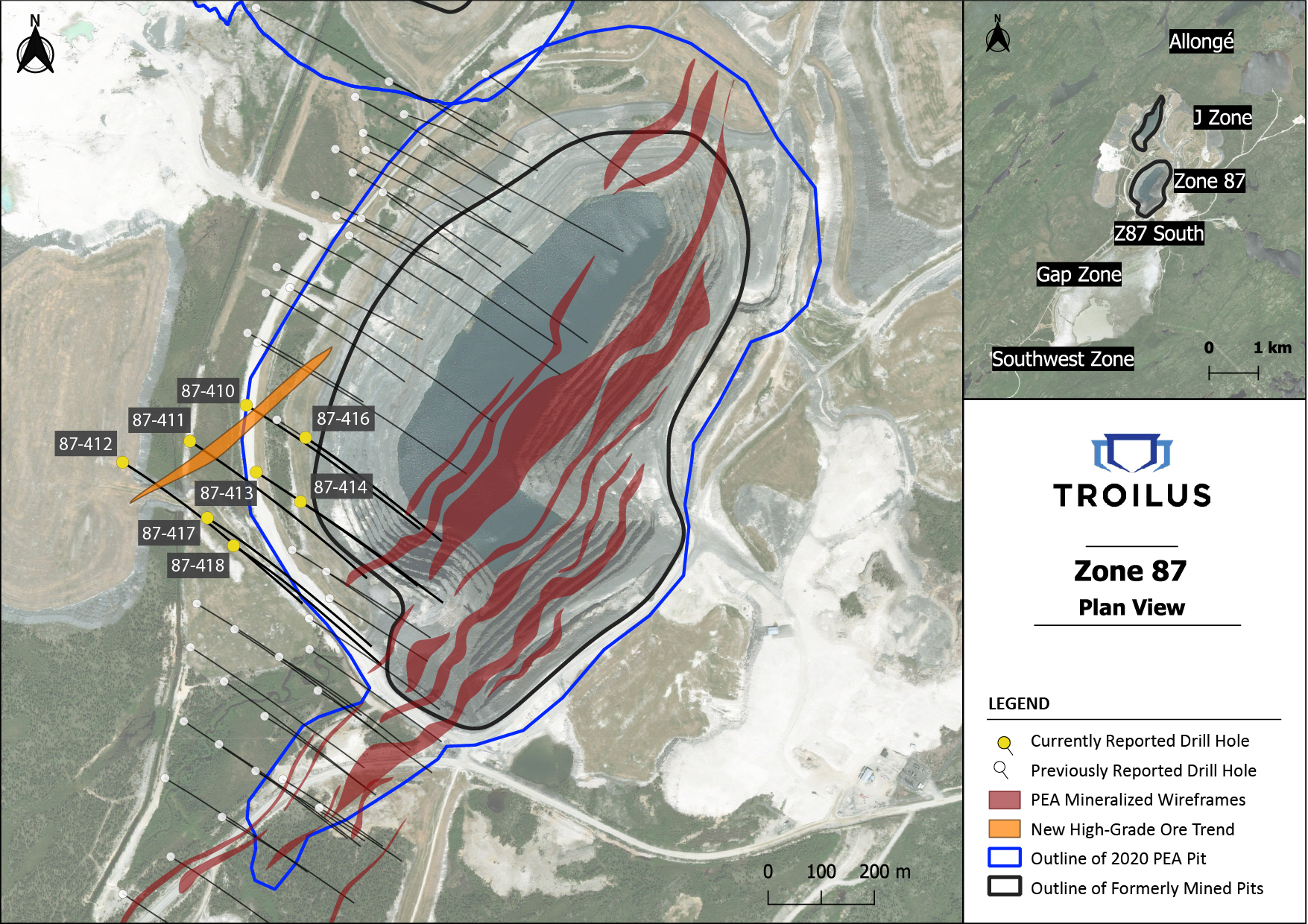 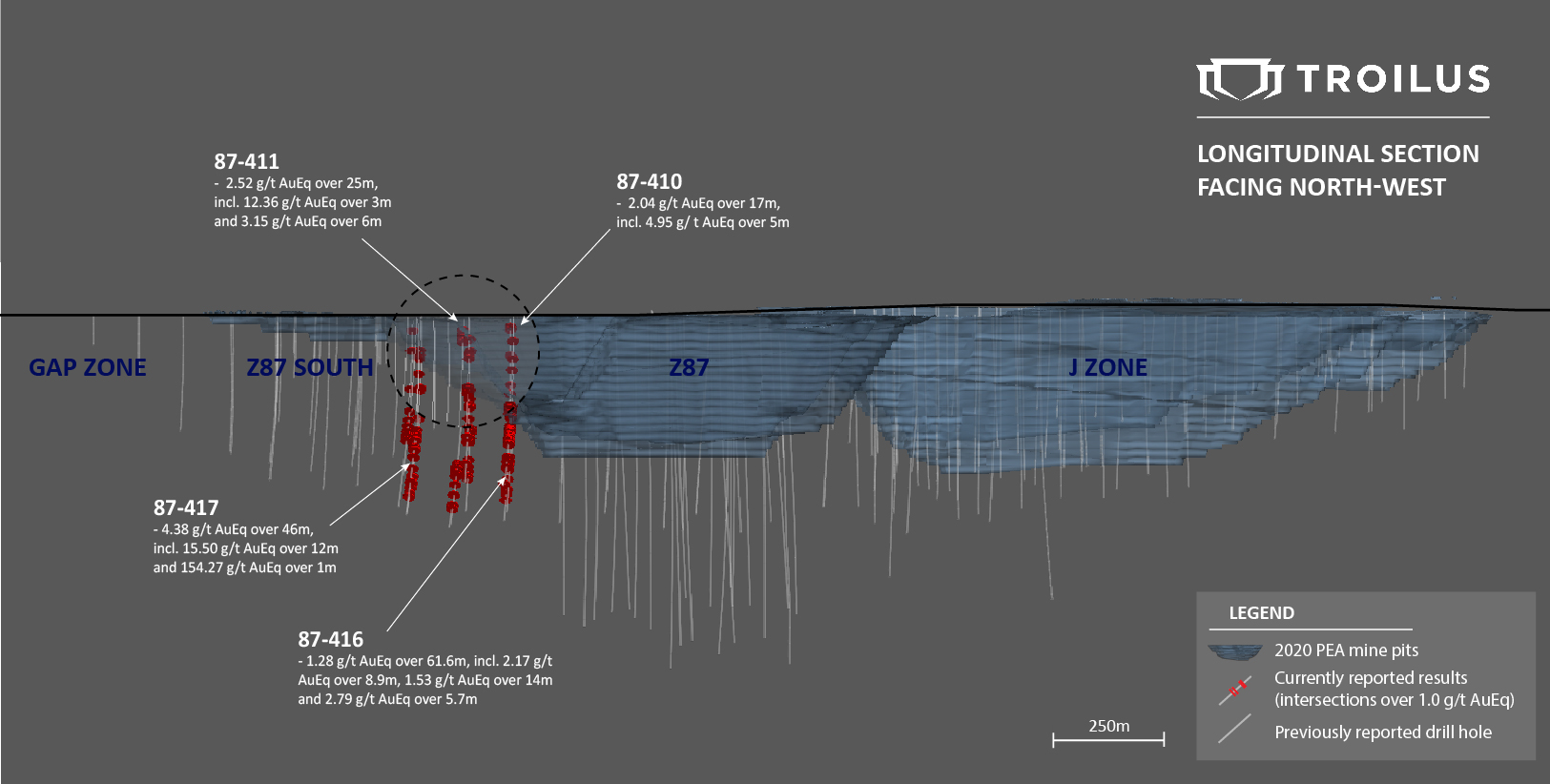 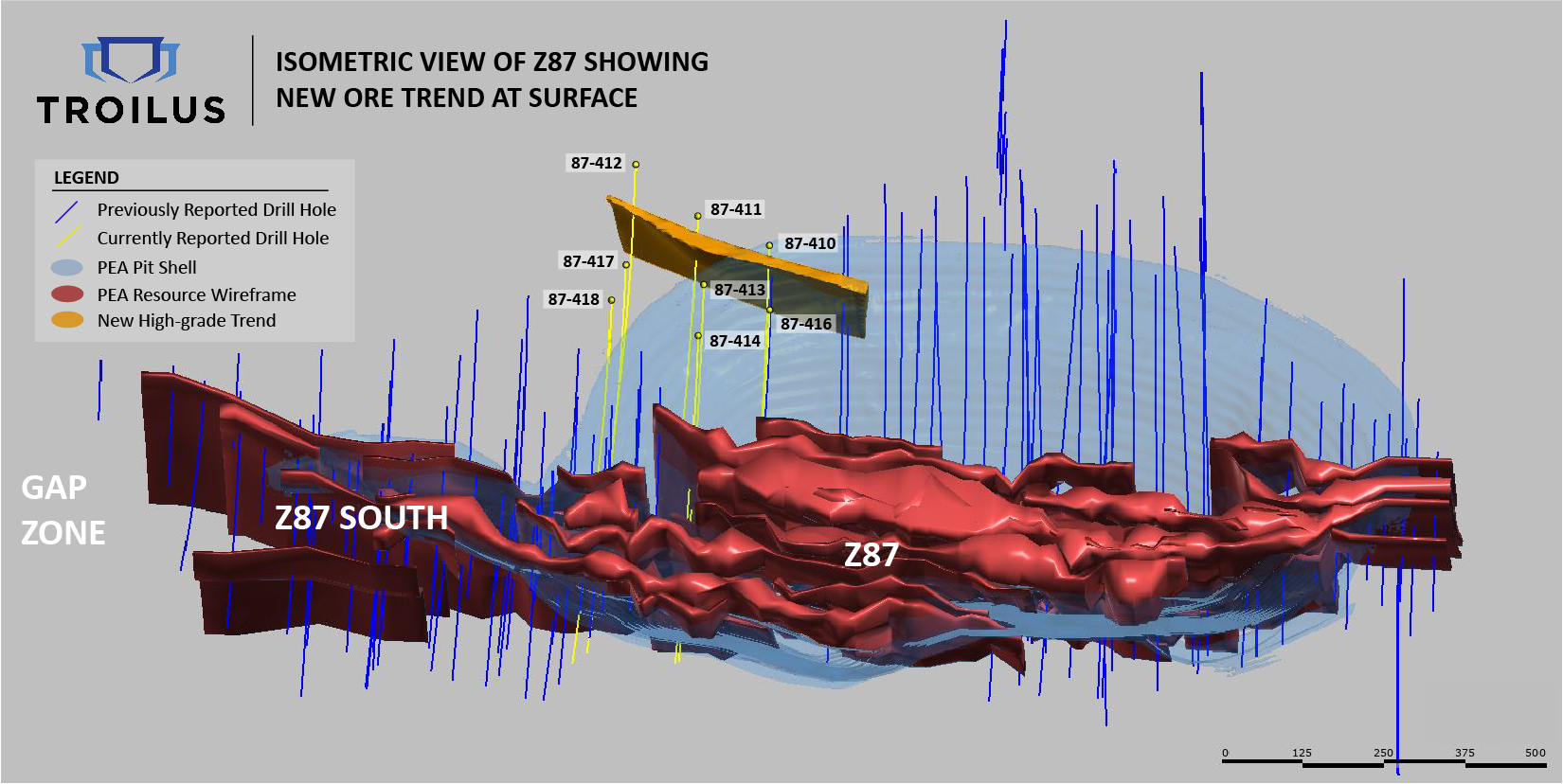 Figure 3: Isometric View of Z87 Pit Showing the New Ore Trend at Surface in the
Hanging-wall

During the Zone 87 drill program, one metre assay samples were taken from NQ core and sawed in half. One-half was sent for assaying at ALS Laboratory, a certified commercial laboratory, and the other half was retained for results, cross checks, and future reference. A strict QA/QC program was applied to all samples, which included insertion of one certified mineralized standard and one blank sample in each batch of 25 samples. Every sample was processed with standard crushing to 85% passing 75 microns on 500 g splits. Samples were assayed by one-AT (30 g) fire assay with an AA finish and if results were higher than 3.5 g/t Au, assays were redone with a gravimetric finish. For QA/QC samples, a 50 g fire assay was done. In addition to gold, ALS laboratory carried out multi-element analysis for ME-ICP61 analysis of 33 elements four acid ICP-AES.

The technical and scientific information in this press release has been reviewed and approved by Kyle Frank, P.Geo., Manager of Exploration, who is a Qualified Person as defined by NI 43-101. Mr. Frank is an employee of Troilus and is not independent of the Company under NI 43-101.

Troilus Gold Corp. is a Canadian-based junior mining company focused on the systematic advancement and de-risking of the former gold and copper Troilus Mine towards production. From 1996 to 2010, the Troilus Mine produced +2 million ounces of gold and nearly 70,000 tonnes of copper. Troilus is located in the top-rated mining jurisdiction of Quebec, Canada, where is holds a strategic land position of 1,420 km² in the Frotêt-Evans Greenstone Belt. Since acquiring the project in 2017, ongoing exploration success has demonstrated the tremendous scale potential of the gold system on the property with significant mineral resource growth. The Company is advancing engineering studies following the completion of a robust PEA in 2020, which demonstrated the potential for the Troilus project to become a top-ranked gold and copper producing asset in Canada. Led by an experienced team with a track-record of successful mine development, Troilus is positioned to become a cornerstone project in North America.

The PEA is preliminary in nature, includes inferred mineral resources that are considered too speculative geologically to have the economic considerations applied to them that would enable them to be categorized as mineral reserves, and there is no certainty that the PEA will be realized. Mineral resources that are not mineral reserves do not have demonstrated economic viability. The PEA is subject to a number of risks and uncertainties. See below and the Company’s latest technical report available on SEDAR for more information with respect to the key assumptions, parameters, methods and risks of determination associated with the foregoing.

This press release contains “forward-looking statements” within the meaning of applicable Canadian securities legislation. Forward-looking statements include, but are not limited to, statements regarding the impact of the ongoing drill program and results on the Company, the possible economics of the project and the Company’s understanding of the project; the development potential and timetable of the project; the estimation of mineral resources; realization of mineral resource estimates; the timing and amount of estimated future exploration; the anticipated results of the Company’s ongoing 2022 drill program and their possible impact on the potential size of the mineral resource estimate; costs of future activities; capital and operating expenditures; success of exploration activities; the anticipated ability of investors to continue benefiting from the Company’s low discovery costs, technical expertise and support from local communities. Generally, forward-looking statements can be identified by the use of forward-looking terminology such as “plans”, “expects” or “does not expect”, “is expected”, “budget”, “scheduled”, “estimates”, “forecasts”, “intends”, “continue”, “anticipates” or “does not anticipate”, or “believes”, or variations of such words and phrases or statements that certain actions, events or results “may”, “could”, “would”, “will”, “might” or “will be taken”, “occur” or “be achieved”. Forward-looking statements are made based upon certain assumptions and other important facts that, if untrue, could cause the actual results, performances or achievements of Troilus to be materially different from future results, performances or achievements expressed or implied by such statements. Such statements and information are based on numerous assumptions regarding present and future business strategies and the environment in which Troilus will operate in the future. Certain important factors that could cause actual results, performances or achievements to differ materially from those in the forward-looking statements include, amongst others, currency fluctuations, the global economic climate, dilution, share price volatility and competition. Forward-looking statements are subject to known and unknown risks, uncertainties and other important factors that may cause the actual results, level of activity, performance or achievements of Troilus to be materially different from those expressed or implied by such forward-looking statements, including but not limited to: there being no assurance that the exploration program will result in expanded mineral resources; risks and uncertainties inherent to mineral resource estimates; the impact the COVID 19 pandemic may have on the Company’s activities (including without limitation on its employees and suppliers) and the economy in general; the impact of the recovery post COVID 19 pandemic and its impact on gold and other metals; the receipt of necessary approvals; general business, economic, competitive, political and social uncertainties; future prices of mineral prices; accidents, labour disputes and shortages; environmental and other risks of the mining industry, including without limitation, risks and uncertainties discussed in the most recent Technical Report and in other continuous disclosure documents of the Company available under the Company’s profile at www.sedar.com. Although Troilus has attempted to identify important factors that could cause actual results to differ materially from those contained in forward-looking statements, there may be other factors that cause results not to be as anticipated, estimated or intended. There can be no assurance that such statements will prove to be accurate, as actual results and future events could differ materially from those anticipated in such statements. Accordingly, readers should not place undue reliance on forward-looking statements. Troilus does not undertake to update any forward-looking statements, except in accordance with applicable securities laws.